A winding path to the Motherland 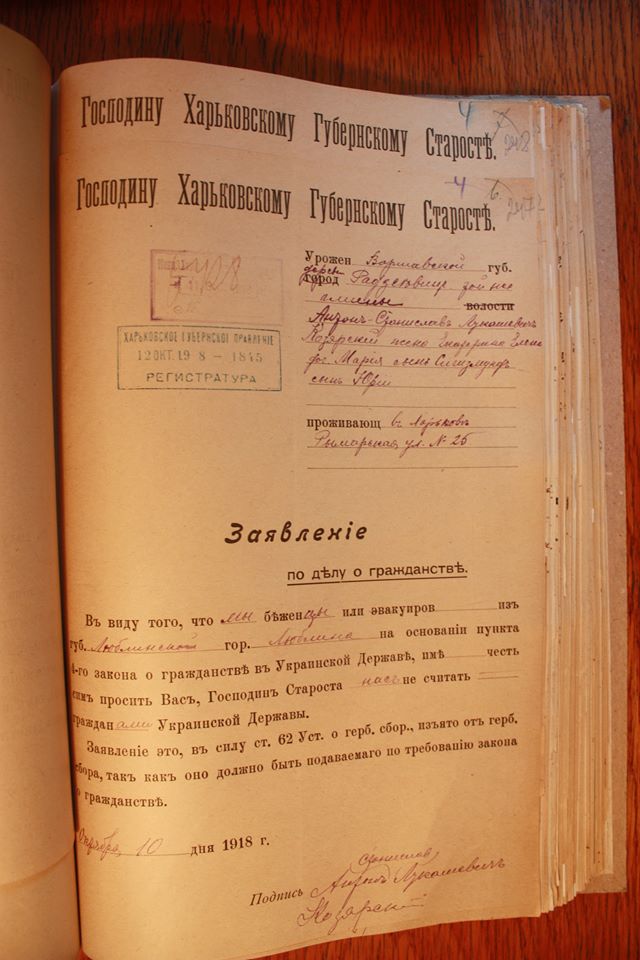 History is a cyclical process over which ordinary people, prisoners of a situation, do not have any power. Everything that happens is not a punishment of a specific person for some guilt; war, pestilence, genocide – mankind knows a lot of examples of events that caused personal tragedies, broke families apart, forced the migration of whole nations in order to escape from poverty, misery and persecution. In a word – to seek refuge where they were not going to do it, but due only to the blind play of fate forced to submit to it or perish in a whirl of cruelty and human hatred.

Our history is not a history of fear or shameful escape, but above all a history of love: of boundless memory of the land, childhood, first friends, first love, mother and father, and of course of the Motherland. A human being, regardless of social status and place of residence, always knows who he or she is. And this is a constant that defines us as people on a subconscious level.

The end of one of the most brutal and violent wars in the history of mankind brought an endless pain and terrible consequences that resulted in the death of 10 million people. In turn, many others found themselves in a place where they would hardly have been in more favorable circumstances. The First World War forced migrations literally of huge masses of people. In particular, hundreds of thousands of people fled from war, moving from west to the east of the Russian Empire. Among them were the Poles, who in fact are discussed in this essay.

The end of the long war marked the beginning of a brand new era in the development of many nations. Many of them declared intentions to build their independent states on the ruins of empires. Among other, a sovereign Poland resurrected from nothingness. Having received so long-awaited freedom, the country began to recover itself: rebuild cities, economy and industry. After so many years, this desired dream of the Poles became a sweet reality, on which each of them gripped with both hands. People who were forced to move deep into the Russian Empire, began to look intently for a way home.

Kharkiv province was the quiet harbor for all of them – Polish farmers, craftsmen, merchants, nobles. Someone came here with nothing, others managed to take out the most valuable things for them, and some came here even with the only sorrowful thought that there is no way back home.

In order to illustrate the social heterogeneity of the Polish repatriates properly, let’s examine examples of appeals to the local authorities of the city of Kharkiv at the time when the national consciousness of the Polish citizens began to grow constantly and to call them home. As a result, the community faced the so-called “Problem of citizenship”, information about which was spread by local newspapers.

Among the persons who applied in this case to the authorities, there were ordinary peasants, the Nizhynsky family, who lived at Rymarska Street 23, Ap. 7. They were among the first to apply for their release from Russian citizenship. The head of the family, Jan Kazimirovich, wrote an application request for the whole family (his sons Jan and Witold and his wife Anna), based primarily on the citizenship law of those times (Paragraph 4 of the Citizenship Law, Article 62, on the stamp duty). According to it, they had the right to get free of the stamp duty and, automatically, to cease being citizens of the Ukrainian state. Even gentilitial noblemen were freed of it, such as Alexander Stefanovich Roshkovsky, who lived at the address Kaplunivska Street 7, Ap. 11, now Vulytsya Mystetstv (Art Street). Noblemen, like officers, solved this problem personally. Based on the studied data, one can conclude that large families lived mainly in the central part of the city, being concentrated on Rymarska Street or Klochkivska Street. In turn, those with special status (gentry, officers) settled mostly nearby administrative structures in less populated streets, mostly in lanes, not far from the modern underground station “Architect Beketov”.

The apogee of repatriation applications addressed to the Kharkiv governor fell at predominantly August and October 1918. It can be assumed from sources that this reverse migration had two waves. Families and people who dwelled at the streets where the majority of migrated Poles lived were able to do so at the end of August (those who lived mostly on Rymarska Street and Klochkivska Street). Others, from the less populated terrain (district of Kholodna Gora, the northwestern part of the city, where people lived by ones and twos), had the opportunity to do it in late October or early December.

Main arguments of the overwhelming majority of the Polish residents of Kharkiv were similar to the one presented by A.L. Liakhovsky, an ordinary peasant from the village of Yezheve, Warsaw province:

“I have the honor to report to you, Mr. Headman, that, considering my descendance – I am from the province of Warsaw, Pultus County, Kleshevsky district, village of Yezheve – I do not want to take the Ukrainian citizenship, since I have property and relatives in the above mentioned area.”

Relatives and property – all, that a person collected lifelong and without which life is impossible – a country and personal self-determination. These arguments were mentioned in requests mostly.

Unlettered people asked others to settle the document. Let’s say, the Kharkov governor got dozens of letters by procuration, with the notes “Due illiteracy, I write for …”.

Each of us dreams of returning to native land, and it is waiting for its sons and daughters. And this time the dream came true. The houses on the streets became empty, everyday activities in apartments ceased, people from all over Kharkov departed day after day with big suitcases, children in their arms, with parents and wives. Gradually, the streets changed and were not like they used to be. They became a little bit quieter, because someone finally really got home.