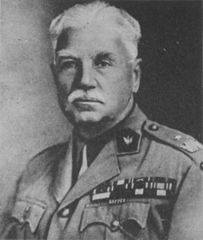 This reputed representative of the Polish people is known first of all as a high skilled military surgeon, Brigadier General of the Polish Army, Head of the Department of Health Care, professor and holder of Habilitation degree in Medicine. Sharetsky was a man with many titles, a huge heart and rightful view of life.

His family did not belong to the higher circles of society, was not aristocratic. His father worked as a senior trainman in the crew of a freight train, which traveled along the Libau-Romny Railway. He had extremely humble income, from which he fed his great family. Boleslaw respected his father for his dedication and hard work in behalf of the family. His father served always as an example for Boleslaw and significantly influenced the formation of his son’s character.

Boleslaw Sharetsky was born on the 17th of March, 1874, in Minsk. Although his father tried to provide him with a decent childhood, Boleslaw’s first years of life fell to the time of a difficult financial situation. At 9, he started gymnasium in Minsk at the expense of railroad where his father worked. Boleslaw had a very sharp sense of justice. Therefore, in the first year of study, defending the dignity of the Polish people, he found himself in dispute with the teacher of history. Conflicts became regular and were getting worse. Neither warnings nor threats could influence Boleslaw. In the end, he was expelled from school without the right to continue study in educational institutions of the Russian Empire. The whole family suffered from this, too: his father was fired, the house of Sharetsky was placed under police surveillance; the family was deprived of all means of survival.

Did this situation stop future General? Of course, it didn’t! Boleslaw decided to leave his home to continue his life path on his own. He found a way around the prohibitions imposed on him and, despite the obstacles, illegally enrolled Kyiv military school of paramedics. Having passed entrance exams with flying colors, he studied there for 4 years (1888-1892) under the terms that for each year of training he must work out 1,5 years (18 months).

Having graduated from the Kyiv School with honors, he went to Kharkiv, where he started working at the Kharkiv Clinical Hospital (Kultury Street 5 (founded in 1873)). Here Sharetsky quickly won respect of his colleagues. In the second year of his work, he already performed duties that were not characteristic for his position. This played him into hands. After all, Boleslaw continued to engage in self-education without leaving the idea of higher education in his profession. Having received an excellent reputation among his colleagues and passed exams flawlessly, he got a permission from the Minister of Public Education for a deferral from work for a period of study at the medical faculty of the Kharkiv University (Universytetska Street 16). He entered it in 1896 and here Sharetsky’s rebellious fire showed itself again. After some time, he, using the position of the headman of the group, gathered like-minded people around him, agitating his comrades to create clubs, regularly ran literary-political circles, what was not appreciated by czarist regime. For this he was arrested twice. But in both cases, he managed to escape the harsh consequences thanks to his impeccable reputation on the job and academic excellence.

In parallel, Boleslaw got the opportunity to work at the medical faculty of the Kharkiv University. Thanks to this, he was able to earn money for further education and help his family. In particular, he began to send part of his earnings to his relatives, and later provided studying for his younger brother and sister in Kharkiv.

In 1904, Sharetsky fell into the whirlabout of the Russo-Japanese war, becoming a regiment’s junior physician. There he acquired experience in the units of rapid deployment of the Russian Red Cross. During the war Boleslaw Sharetsky showed again his inclination to “eternal rebellion”. Despite all traditions, he refused to serve as a simple receptionist in a first-aid room, working as a full-fledged military doctor. One can say that it was then, under those circumstances, that an outstanding surgeon was born who was on a firm ground in any difficult situation.

During 1906-1910 he worked as an associate in the surgical department (Kultury Street 5). During that period, Sharetsky actively pursued science and obtained a doctor’s degree in medicine, defended an academic paper on the topographical anatomy of the umbilical cord. And in 1913 he took a degree of associate professor. Boleslaw lectured to students on urological diseases, etc. During the First World War, Boleslaw Sharetsky got an opportunity to act as a military doctor once again. He went to the front as a battlefield surgeon and at the same time as a consultant (since he had a degree). Here Sharetsky continued to propagate among military doctors the idea of bringing first-aid forces closer to the line of confrontation. In 1916 he participated in the Moscow Scientific Conference, where he gave an observation report, in which, again, on the basis of the experience of the Russo-Japanese war, he put forward the idea of the need to provide the first emergency aid on the battlefield (he also raised the question of the ineffectiveness of abdominal operations of wounded and concerns about high mortality among the injured). Having the status of a consultant, Sharetsky decided that he can do much more if he demonstrates how to improve the treatment system of the severely injured in the most vulnerable spots. For that purpose, he visited a number of military hospitals at the end of 1916, trying – on the basis of his own experience – to improve their work. The merits of an outstanding surgeon did not remain unnoticed. In 1916 he became a professor of surgery at Taurida University. But the desire to continue his labor of love in the Motherland was stronger than the desire to relax.

In 1919, Sharetsky left the post of professor, in order to finally return to Poland with his wife. In 1920 he entered the armed forces of Poland and quickly got the post of the Head of the surgical department of the Ujazdowski Hospital in Warsaw. At the same time, this well-known surgeon became a member of the Scientific Board of the Department of Health Care at the Ministry of the armed forces.

In 1922, Sharetsky was invited to the post of Professor of Surgery at Stefan Batory University in Vilno. For nearly 12 years, he had been nurturing a new generation of surgeons, implanting his ideas, which he defended on the front lines and during scientific conferences. Having gained almost impeccable reputation, Boleslaw Sharetsky remained sensitive to everyone’s problems. He was said to treat human suffering as a father treats son. In 1934-1937, Sharetsky became director of a public hospital, and later – the Director of the Main Hospital of the Second Polish Republic in Warsaw.

This prominent surgeon was always pursued by a war. He accepted his “third fight” in 1939. Being already 65 years old, Sharetsky joined the army at the beginning of World War II, where he became the head of the scientific surgical department of the military hospital No. 104. It was necessary to work in extremely difficult conditions, since this institution was located in a half-burned house and was broken down by bombs. Even during an emergency evacuation of the hospital, he continued to operate a patient, and was wounded during that operation. In the wake of the national uplift which overtook Poland during the occupation, Sharetsky again joined the army becoming director of the Health Service. 1941-1942 became a living hell for the 68-year-old surgeon, and the subsequent years of the war – a winding path to his homeland through the battle of Ancona, Monte Cassino, Bologna, etc. Despite the endless work as a surgeon, Sharetsky managed to respond to letters from novice physicians and students who consulted with him on various medical issues. In 1944, in the battle of Monte Cassino, Boleslaw Sharetsky (as General Anders mentioned in his memoirs), 70 hours in a row, operated wounded soldiers in the military hospital, not allowing himself a minute of rest.

After the war, in 1949, Boleslaw Sharetsky became a member of the Council of the Department of Health Care. Until his death, he continued to propagate knowledge about surgery, and even at age 80, being a member of the Society of Polish Surgeons, lectured regular and ran assemblies. In 1956, a serious illness confined Sharetsky to bed, but he did not go to the hospital. And in this last battle, the prominent surgeon won the disease and returned to work (he was treated by the best doctors – Novytsky, Druzsky, Feidzhin). Sharetsky died in 1960, leaving behind works on the treatment of abdominal injuries and numerous know-hows on the treatment of battle wounds in the field. This infinitely talented, disobedient, but at the same time righteous man made the world better back then by his own hands, and makes it better today by his heritage.