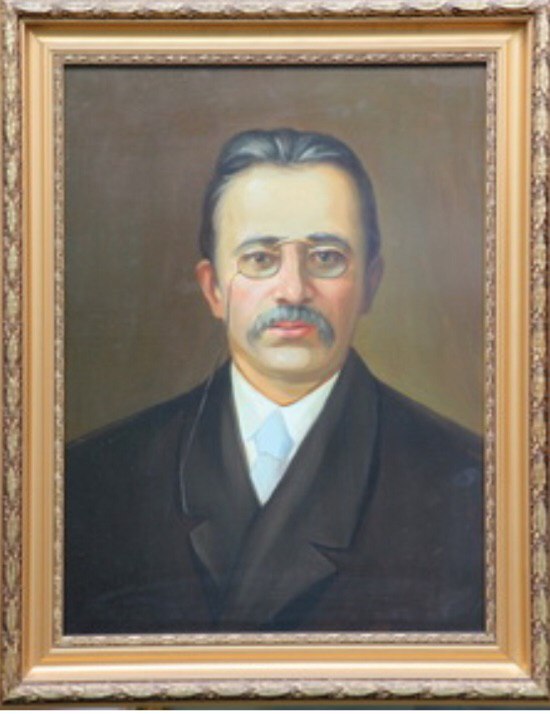 According to archival date, Professor Antony Bonifacy, doctor of physical and mathematical sciences, was born on the 14th of May, 1871 in the village of Khoroshe (Lypovetsky County of the Kyiv Province). His parents – physician Pavlo Psheborsky and Maria Melenevska – came from impoverished gentry families. After graduating from the gymnasium in Mykolaiv with the gold medal (1890), Antony entered the mathematical department of the Faculty of Mathematics and Physics of Saint Volodymyr University in Kyiv. This period of his life was tightly linked with the name of the prominent scientist Petro Mykhailovych Pokrovsky. It was under his influence that the student became interested in studies in the field of the theory of transcendental functions. While studying, Psheborsky showed outstanding mathematical abilities. In 1894, he participated in the contest of student research papers (with the research paper “Taking apart the Weierstrass method in the theory of elliptic functions and establishing a connection between the Jacobi and Weierstrass definitions”) and, as a winner, was awarded a gold medal. In 1894, Psheborsky graduated from the University, but remained there for another two years to prepare for his professorship. Antony’s first scientific works were praised by his contemporaries.

At the request of Professor Petro Mykhailovych Pokrovsky, his scientific “godfather,” Antony got the position of full-time docent of mechanics at the Kharkiv Technological Institute (49.999880, 36.249968) on the 23rd of November, 1898. It was actually there, where the Kharkiv period of life of the hero of our essay began (1897-1922).

An analysis of the extracts from the records of meetings, annual reports and extracts from the annual reports on the work of the Kharkiv Mathematical Society (KhMS) (49.988856, 36.229785) allows us to create a coherent picture of Antony Psheborsky’s scientific work in Kharkiv. First of all, our attention was drawn to the record of meeting of 11.10.1898, at which this young Polish mathematician was – without the election procedure – granted an admission to the KhMS. This was really telling. This fact testifies that Antony began his life in a new place as a true scientist, immediately joining the local scientific society. Having moved from Kyiv to Kharkiv, the hero of our story began to communicate with the lecturers of the Kharkiv Technological Institute, which at that time had no faculty of mathematics.

O.M. Buts in his article pointed out that A. Psheborsky was “for almost twenty years the permanent secretary of the Kharkiv Mathematical Society”. In 1902, the scientist defended his dissertation on the subject “Some applications of the theory of linear congruences”, obtained a master’s degree in mathematics and was invited to the post of privat-docent of the department of pure mathematics at Kharkiv University. In 1908 at the Moscow University, Antony Psheborsky defended successfully his doctoral dissertation on “Research on the theory of analytic functions, the problem of extending the Taylor series”. In the same year, he became a full professor at Kharkiv University. In parallel in 1908-1915, the Polish mathematician taught analytical geometry at the Higher Women’s Courses (50.013076, 36.246957), as well as gave practical classes in mathematical analysis and geometry at the Kharkiv Technological Institute. During that period, the scientist’s works were being actively published. In 1903 and 1908, he published the two-volumer “Introduction to Analysis”, in 1905 and 1909 – “The Course of Analytical Geometry”, wrote a series of articles on hydrodynamics for the title “Popular Encyclopedia”, published a number of research papers in the bulletin of the Kharkiv Mathematical Society. In 1919, A. Psheborsky became the rector of the Kharkiv University, and from next year’s June – the rector of the Academy of Theoretical Knowledge, created on the basis of the Faculty of History and Philology and the Faculty of Mathematics and Physics of the University. At the same time, the scientist headed the department of theoretical mechanics. From 1921, A. Psheborsky was the rector of the Institute of Public Education, which was formed after the reorganization of the Academy.

It should be noted that at that time the Ukrainian high school underwent significant changes. “New government” reoriented the educational system to solve practical problems. In particular, research departments were separated from educational ones. Shortly after the appointment as the head of the department of theoretical mechanics, Antony was accused of espionage, arrested and removed from all posts, but after three weeks he was set free. Soon he was elected Dean of the physics and mathematics department, and then for the second time the rector of the Kharkiv Institute of Public Education. However, the anti-Polish sentiments, which were widespread in the Ukrainian SSR at that time, forced the scientist to apply to the Polish Ministry of Public Education with a request for political asylum. As a result, Antony Psheborsky got the post of full professor of mathematics at the University of Vilna (now Vilnius University) on the 1st of December, 1921. Having the protection of the Polish mathematician Waclaw Sierpinski, Antony Psheborsky moved to Warsaw on the 22nd of May, 1922, where until 1939 he was a full professor at the department of theoretical mechanics at the University of Warsaw (later it was transformed into a separate faculty). Antony Psheborsky held there courses on analytical and theoretical mechanics, the dynamics of rigid and liquid bodies. He also taught analytical geometry, differential and integral calculus at the engineering and construction department (1922-1932) and theoretical mechanics at the chemical department (1924-1934) of the Warsaw University of Technology. Professor Antony Psheborsky worked at the University of Warsaw until the beginning of the Second World War. After reaching retirement age in 1937, he was twice re-elected to post of professor on the basis of the conclusion of the Faculty of Mathematics and Natural Sciences of the University (each time for a term of one year). The third application on the continuation of work coincided in time with the beginning of the war and therefore was not examined.

In 1901, Professor Psheborsky married Lidia Oleksiivna Ivanova (she died about 1935). In 1902, the son of Antony was born in wedlock. He was a good pianist-amateur as well as a father of Bonifacy.

Professor Antony Psheborsky died on the 24th May, 1941, in occupied Warsaw, and his son was executed by the Germans for his participation in the Warsaw uprising (on the 3rd of August, 1944). The whole Psheborsky family is buried in the grave of Lidia Psheborska at the Orthodox cemetery in Warsaw.

As we see, A.P. Psheborsky was an all-round man, a wonderful scientist and a talented mathematician. His contribution to the development of activities and the expansion of links of the KhMS cannot be overestimated. Due to his personal diligent work, detailed information on the history of origin and the first years of the life of the mathematical society in Kharkiv has been preserved until now. Membership and work at the KhMS, interpersonal communication with the mathematicians of Kharkiv inspired A.P. Psheborsky to researches in various branches of scientific knowledge.