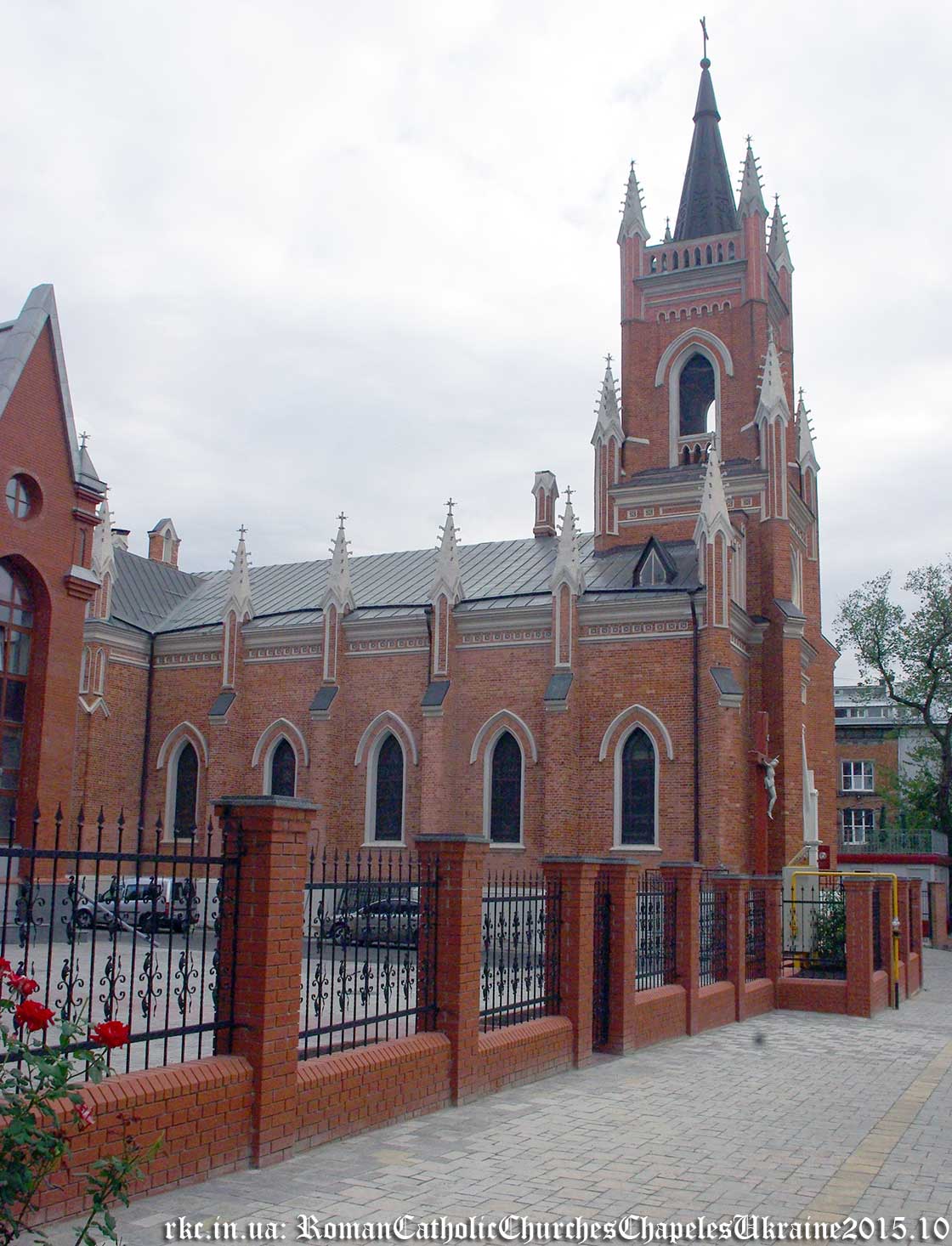 Religion has always occupied an important place in the spiritual life of the Poles. That is why the history of the Kharkiv Roman Catholic church began with the appearance of the first Polish settlers in our city at the end of the 18th – the beginning of the 19th centuries. At that time, the Roman Catholics of Kharkiv, represented in addition to the Poles by the Germans, French, Italians, etc., had neither a permanent room for sacred worship, nor a permanent priest. Divine services were celebrated by visiting Roman Catholic priests in private houses, in the 1st Kharkiv High School (49.989382, 36.234112) and even within the walls of Kharkiv University (49.988774, 36.229860).

In 1829, the Kharkiv Catholic community got a permanent priest – Franciscan monk Father Hemilion Chaplinsky. The following year, Catholics of Kharkiv, already led by a new prior, bought two courtyards on Malosumska Street (later called Kokoshkinska Street, now – Gogol Street) with a two-storey building. On the 1st of October, 1832, after its reconstruction, this building was consecrated as the first Roman Catholic church in Kharkiv (of the Holy Rosary of the Blessed Virgin Mary). It was located on the corner of Malosumska Street (nowadays – Gogol Street) and Proviantniy Lane (nowadays – Marianenko Lane) (49.995906, 36.234539).

From the beginning, Kharkiv Roman Catholics were experiencing financial difficulties: they often had to borrow money for construction works. But in 1850, a stone house for the clergy was erected near the church (the architectural design of this building, authored by engineer sub-lieutenant Veretsinsky, has been preserved in archive materials). The reconstruction of the temple itself was also carried out. In September 1862, the parishioners purchased a pipe organ for the church. The first organist was Ivan Dombrowski, who had worked in this position for 20 years.

In length of time, the Kharkiv Roman Catholic community increased. In 1886 it numbered nearly 3000 parishioners (educators, businessmen, engineers, representatives of the creative professions, etc.), to whom 1500 Roman Catholic military servants should be added. It was the church that became a spiritual center for them, where they could pray in their native language and communicate with fellow-countrymen. It is noteworthy that many Roman Catholic priests, having Polish ancestry, were fluent in the major European languages. This made it possible not only to communicate with believers of other nationalities, but also to consolidate multinational Catholic community of the city.

However, the condition of the temple was deteriorating and parishioners emphasized the financial uselessness of repairing it. Therefore, there was a need to build a new, larger church. After obtaining permission in 1886, preparatory work began. The construction itself lasted during 1887-1892 and was carried out solely at the expense of the collected donations. It should be noted that the well-known Polish architect Boleslaw Michalowski managed the project and did it at no charge.

On the 1st of December, 1891, the curate of the church, Piotr Kisarzhevsky consecrated it in honor of the Assumption of the Blessed Virgin Mary. The Bishop of the Archdiocese of Mogilev, in his turn, solemnly consecrated the high altar on the 26th of July, 1892. Meanwhile, the old building, which remained on the balance of the temple, was leased to the Kharkov Gymnastic Society. In 1908, at the location of the first Roman Catholic church in Kharkiv, a new building of the Polish House was built, designed by Polish architectural engineer Zdzislaw Harmansky (the official name – Kharkiv Polish Public Assembly “Polish House”; the house itself has not been preserved), (49.995906, 36.234539).

New Roman Catholic church on Malosumska Street (now – Gogol Street 4) (49.996519, 36.235294) was built in Neo-Gothic style, with a high bell-tower with three bells. The temple had four altars: of the Assumption of the Blessed Virgin Mary (the high one, with the statue of the Virgin Mary, which was made of blue marble by an Italian master in the 19th century and still remains a relic of the cathedral), of the Crucifixion of the Savior (created specially for the Kharkiv sanctuary by Polish artist Henryk Siemiradzki), and of St. Joseph and St. Anthony of Padua. To the right of the high altar was an ambon, which could be reached from the sacristy. Under the ambon stood a statue of St. Peter. On the walls of the church in special niches, canvas-icons hung. The temple housed two confessionals made of oak and oak benches, too.

In general, the activities of the Kharkiv Roman Catholic priests and parishioners were multidimensional: a hospitage was opened for foreigners and a school – for poor Catholic children, a construction of a stone chapel was organized in Sumy and so on. During the First World War, these activities included also a care of thousands of Pole refugees who were forced to set out to the internal provinces of the Russian Empire (including Kharkiv) as a result of Russian military policy.

Unfortunately, the Bolsheviks’ rise to power in Russia (1917) and the defeat of the Ukrainian national forces in rebuilding an independent state caused not the best changes in the life of the Polish community in Kharkiv. On the other hand, after the declaration of independence of the Polish Republic (11th of November, 1918), many Poles returned to their homeland. In Ukraine, however, the new government was fiercely fighting believers, priests, and the church itself.

Kharkov Roman Catholic priests were no exception – their fate was also tragic. The biography of the abbot of the Kharkiv Roman Catholic parish in 1919-1926, Father Vikentiy Iliin, is representative in this sense. In 1926 he was arrested on charges of performing religious rituals without preliminary registering in civil registration bureaus, storing illegal literature, handing bribes to employees of Soviet institutions, and anti-Soviet agitation. Special council at the board of the State Political Directorate of the USSR marked Fr. Vikentiy Iliin as a “socially dangerous element”, and afterwards he was sent to the Butyrka prison in Moscow, and from there to a camp on the Solovetsky Islands (where he resided in 1927-1929). Subsequently, Fr. Vikentiy Iliin lived in exile in the Arkhangelsk region. In early 1933 he was released and allowed to settle in Kaluga. In September of that year, Fr. Vikentiy Iliin left for Lithuania due to the Soviet-Lithuanian political prisoner agreement. Shortly after, the former abbot of the Roman Catholic community moved to Poland and settled in Warsaw, where he died in 1937. His successor, Father Leonard Gashynsky was shot dead in 1937 at the age of 70 together with twelve active Kharkiv parishioners. That same year, the Soviet authorities ordered the execution of a complete Polish House staff (24 persons).

It should be noted that during the 1920s and 1930s, an important role in the life of the Kharkiv Roman Catholic church was played by its support from the Embassy / Consulate of the Republic of Poland (50.002048, 36.249015). Thanks to such assistance, which was often of a secret nature, the Kharkiv shrine remained able to function for a long time and was closed by one of the last in the Soviet state. The local government made the decision to close it in 1940, and at the same time the Roman Catholic parish was liquidated, too. The building of the former temple was given to the Taras Shevchenko Kharkiv State Theater (now it is the Taras Shevchenko Kharkiv State Academic Ukrainian Drama Theater).

The Cathedral of the Assumption of the Blessed Virgin Mary resumed its work during the German occupation in 1941-1943. The sacred worship was mainly held by Italian chaplains. After the Soviet troops entered Kharkiv, the temple was closed again. In 1947, the building of the temple was handed to the Regional Cinema administration. An internal restructuring of the shrine took place according to new needs and it became a storage of old filmstrips. The internal space got new walls and was divided into two stories with the additional floor structure. Workrooms and garages appeared near the building.

During the Khrushchev Thaw, some unjustly convicted representatives of the Kharkiv Roman Catholic community were rehabilitated, alas, many of them – posthumously.

In the wake of the social and political changes in late 1990, the Kharkiv Roman Catholic community began to revive. Believers, mostly Poles, prayed at the church for the future parish and the return of the temple. On the 7th of January, 1991, for the first time in many years, a mass was served on the steps of the Roman Catholic church by Father Yuri Ziminski, the vicarial priest of the Kyjiv parish of the Elevation of the Holy Cross. That same year, the process of registration of the Kharkiv Roman Catholic community was carried out and the restitution of the temple began. In the mid-2000s, the exterior and interior restoration of the Kharkiv Cathedral of the Assumption of the Blessed Virgin Mary was completed. Today, the parish library and publishing house operate there.