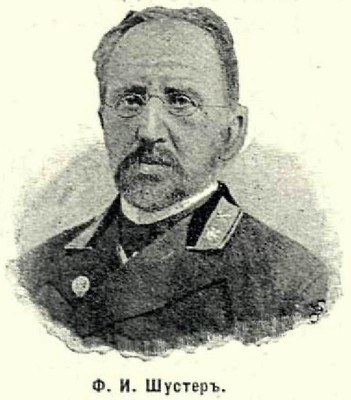 Franciszek Shuster (1832-1908), whose works adorn our city, belongs to a circle of little-known Polish architectural engineers. He was born in Warsaw, then went to high school and graduated from art school, having earned the title of architect of the 1st degree. During the years 1852-1855 F. Shuster was a non-matriculating student at the Imperial Academy of Arts in St. Petersburg. At the end of his studies, he, with the permission of the superintendant for communication lines and public buildings, passed the final examination together with the students of the practical class of the St. Petersburg Construction School, having got the title of civil engineer and the rank of a provincial secretary.

Franciszek Shuster worked in Pskov, St. Petersburg (there he received the rank of academician of architecture at the Imperial Academy of Arts (1857) and the rank of architectural engineer at the Construction School (1871)), in Minsk and Saratov. Since 1890, a talented Polish architect held the position of provincial engineer in Kharkiv. Upon his projects, created in Neo-Baroque and Neo-Russian styles, the following structures were erected or rebuilt in the city:

– the building of the former Olexandrivsky hospitage for the cheap canteen of the Kharkiv Charitable Society, located on Kowalska Street (reconstruction, 1890, 49.984731, 36.231995);

– the building for the school for the blind children on Sumska Street 55 (in 1891, in co-authorship with S. Zagoskin, now it is the public institution “Kharkiv special educational complex named after V.G. Korolenko” of Kharkiv Regional Council); construction became possible thanks to donations (50.008239, 36.237951).

During the years 1897-1900, F. Shuster supervised the construction of the State Bank’s Kharkiv office on Teatralna Square (now – Poezii Square 1, 49.995126, 36.233870), built upon the project of Roman Golenyshchev. This two-story building is shaped in a Florentine renaissance style. During its erection, in the autumn of 1898, there was a collapse of the edge of the wall and the eaves of the house, which led to injuries of construction workers. The accident occurred because the masonry was finished later than the schedule had foreseen it, when the air temperature was below the normative level for such kind of works. Problems were redoubled by the erection of the roof: heavy beams and bars were hammered with a large wooden hammer before the mason’s mortar of the eaves became hard. In addition, the carpenters stood regularly on the eaves because there were no special scaffolds for the installation of wooden parts of the roof. Provincial architect F. Shuster and his assistant, civil engineer L. Vasyliev, were accused of this accident. The trial took place only after a year. Even before the trial began, the injured workers got a financial compensation from both of accused persons and a merchant Sumsky, the contractor who was installing the roof. Therefore, in court, the workers did not bring any complaints or claims against the architects. Shuster and Vasiliev did not admit their guilt. They claimed that the collapse had happened due to the negligence of the carpenters, who, despite the warnings, set their feet onto the eaves, neglecting their safety. The case was covered by a correspondent of the local newspaper Yuzhny Kray. As a result, F. Shuster was sentenced to seven, and L. Vasiliev – to ten days of a military disciplinary cell, the costs were imposed on the accused persons. However, the architects appealed, and within a year the criminal department of the Kharkiv court of justice mitigated their sentence a little.

On the 7th of January, 1901, the new building of the Kharkiv office of the State Bank was solemnly opened and consecrated by the Archbishop of Kharkiv and Okhtyrka Amvrosiy. Three days earlier, money and other valuables were transferred to these premises under the strengthened escort. The new building was bigger and much more comfortable in terms of its functions. “Wide white marble stairs lead to both floors of the spacious building. Above the main door is an inscription in golden letters – “Kharkiv Office of the State Bank”. On the ground floor there were saving and exchange offices. There was also the bank manager’s apartment adjacent to the exchange office, which had a separate access to Sumska Street. Apartments for lower-level employees were also located there. On the second floor there were two offices of the director, offices of the staff, an accounting room, money vaults and a working cash department. The latter was connected with the exchange office by the means of a lifting machine, which was hidden from the “unauthorized persons” in a special cabinet. The whole house was provided with electric power and central heating. Fretted ceiling, parquet flooring, large and bright rooms and bentwood furniture – all this admired contemporaries. The estimate of the new building was 450 thousand rubles. Later this building got some extra floors, but its overall style has been preserved. However, the purpose of the building has not changed – the Office of the National Bank of Ukraine in Kharkiv region is located here nowadays.

While being a provincial engineer, Franciszek Shuster controlled the construction works in Kharkiv in one way or another. He headed the development of the master plan of Kharkiv in 1895-1897. (the co-authors of the plan were B. Mikhalowski, G. Stryzhevsky, A. Kondratovsky, M. Shevtsov, M. Brandtner). The provincial engineer cared about improving the city’s amenities. For example, in 1895 he applied to the governor for a transfer of blacksmiths from the center of the city, namely Kowalska Street (Blacksmith Street), “which are fumed and sooty, make the atmosphere absolutely unbearable not only for people who live on the street, but also for those who just pass through it.”

In addition to his professional work, F. Shuster was also active in social duties. He was a full member of the Imperial Russian Technical Society (its main purpose was to promote the development of industry and engineering), a member of the Imperial St. Petersburg Society of Architects (it had to develop architectural activity) and the Society of Engineers in London. Franciszek Shuster was also a member of many charitable (and not only) committees in his field of service. In particular, during his tenure in Kharkiv, he was a director of the Kharkiv Prison Committee and a member of the Kharkiv branch of the guardian board for the blind people. In both cases, the architect made numerous donations.

In 1907, at the decision of the Ministry of Internal Affairs, state councillor Franciszek Shuster was promoted for his professional achievements to the next rank in the hierarchy – an actual state councillor.

Franciszek Shuster died in Kharkov in 1908.