The architecture of the city creates its unique image. The “main builder” – that is how the word “architect” is translated from the Ancient Greek – lives and works in accordance with the needs of society, its cultural and aesthetic demands and, of course, economic resources. One of the creators of the image of Kharkiv in the late 19th and early 20th centuries became Polish architectural engineer Zdzislaw Harmansky (1859-1924).

Mariam-Josef-Zdzislaw Harmansky was born in 1859 in Ekaterinoslav (now Dnipro). He studied at the St. Petersburg Institute of Civil Engineering, which he graduated in 1885 with the title of civil engineer first-class. After a service in Novocherkassk, Z. Harmansky moved to Kharkiv in 1890. At first he worked as a junior engineer at the Kharkiv provincial government and from 1896 to 1917 he occupied the position of provincial county engineer and head of the technical department of the city board. At the same time he headed the commission on the arrangement of city sewage systems. Z. Harmansky participated in the development of the “Rules for the development of the city of Kharkiv”, which were approved by the City Council and were valid until 1917.

In Kharkiv, the young architect joined the local department of the Imperial Russian Technical Society, which was designed to promote the development of industry and technology. In our city Z. Harmansky also discovered a pedagogical talent in him – during 1911-1919 he taught technical drawing at the Technological Institute on Technological Street (now National Technical University “Kharkiv Polytechnic Institute”, Kirpichova Street 2).

In the beginning of his career Z. Kharmansky adhered to the neoclassical style forms and Neo-Baroque, later – to Modern. As a demonstration of the genius of this Polish architectural engineer serve a lot of private commissions that he performed in Kharkiv. Harmansky lived with his family in a one-story building built upon his own project at the corner of Pushkinska Street and Yumovska Street (now Gudanova Street). Unfortunately, this building has not survived.

In 1893, Z. Kharmansky took part in the reconstruction of the building of the City Theater on Sumska Street 9 (now Kharkiv State Academic Ukrainian Drama Theater named after T.G. Shevchenko). The works were conducted under the direction of another well-known Polish architectural engineer B. Mikhalowski. Together with other experts, Z. Kharmansky worked on the exterior and the interior of the theater building.

A spectacular example of the embodiment of the Modern style is the building of the former Russian-American rubber factory “Triangle”, erected in 1901 on Ekaterinoslavska Street 35 (now Poltavskiy Shlyakh). The first rubber factory in the Russian empire with a production center in St. Petersburg was opened in 1860 and carefully guarded the secret of the manufacture of rubber. The name “Triangle” in one of the documents addressed to the Ministry of Finance was explained as follows: “Triangle in the emblem mark is the most noticeable thing that even the eye of an unlearned buyer catches.” This building was recently rebuilt after a fire that occurred in the 1980s.

A residential house on Pushkinska Street 20 became the pinnacle of the work of Polish architectural engineer Z. Harmansky (1912). It belonged to professor of surgery Zuckerman and 12 other shareholders. The house fully met the standards of comfort of that time – its three- and six-room apartments were provided with steam heating, electricity, sewage system and telephone as well as an elevator with a leather sofa and a mirror. It is likely that when leaving the house, the ladies tidied their hair, examining their reflection in the mirror, and their companions had the opportunity to observe this action with comfort sitting on the sofa. After the revolution of 1917, these luxurious apartments were turned into shared apartments. During the Second World War, a house on Pushkinska Street 20 was severely damaged and later rebuilt upon the project of architect G. Ivanova.

The complex of the breeding station on Moskovsky Prospekt (Ave) 142, which was erected in 1913 upon the project of Z. Harmansky and Ye. Serdyuk, is one of the first houses in Kharkiv in the style of the Ukrainian Modern. The asymmetric building is decorated with a multilevel tent-shaped tower. Let’s pay attention to the following detail: the tower is balanced by a high quadruple roof, which resembles the Ukrainian clay-walled hut covered with straw. Nowadays there is the Institute of Plant Science named after V. Ya. Yuriev of the National Academy of Agrarian Sciences of Ukraine in it.

The most famous building of Z. Harmansky is the Kharkiv racetrack, which remains the decoration of our city to the present day and is considered one of the best buildings of such functions (Hippodrome Square, now First of May Square 2). In the 19th century, horseracing sport fans could enjoy the action in most of major cities of the Russian Empire on specially equipped wooden stands with canopies. It was such a building that was erected in Kharkiv in 1906 (its project Z. Harmansky designed together with architect O. Ginzburg). However, the wooden building was unreliable considering fire safety, so already in 1907 instead of it the construction of a new stone platform of the racetrack began. It was built in the style of a Romantic Modern in the form of a two-storey building with massive towers, in the center of which was a spacious hall with a totalizator counter. From the side of the field there were stands for 600 seats, equipped with a metal canopy. The architect directed the construction of the stands during 1907-1914.

In addition, upon the projects of Z. Harmansky in Kharkiv were built the following structures:

– a residential building and a private hospital of Moses Fabrikant (a surgeon-innovator in a sphere of maxillofacial surgery), erected in the late 19th century on Theater Square (now Poetry Square 5, the building of the Kharkiv Scientific Medical Library);

– constructing of additional storey upon residential house designed as a children’s shelter at Pushkinska Street 24 (the beginning of the 20th century, now Kharkiv Academy of Continuous Education);

– the building of the women’s industrial school, erected in the early 20th century on Moskovsky Prospekt 37 (now Kharkiv Municipal Dental Clinic No. 6);

– a residential house of Mr. Neroslev with a shop on Ekaterinoslavska Street 55 (1912, now Poltavskiy Shlyakh).

It is worth to mention the fact that this architectural engineer took an active part in the life of the Polish community of the city. In 1908, upon the project of Z. Harmansky who then was the head of the local Roman Catholic parish, on the site of the first Roman Catholic church in Kharkiv at the junction of Malosumska Street (now Gogol Street) and Proviantniy Lane (now Marianenko Lane), a new building of the “Polish House” was constructed (the official name was the Kharkiv Polish Public Assembly “Polish House”, the building has not preserved). The architect was among its founders and later became a board member. The main goal of this organization was the consolidation of Kharkiv Poles, support of Polish culture, traditions, study of history and literature, assistance to needy compatriots.

Let us note that throughout the year there were difficulties with the opening of the “Polish House”. Kharkiv Chief of the Police suspected two founders of the organization in political unreliability: O. Kviatkovsky in relation to his membership in the Kharkiv Committee of the Constitutional Democratic Party in 1906, and I. Knoppe in relation to his participation in the same year in an unauthorized Union of Engineers and Technicians. Characterizing Z. Harmansky and the remaining founders, the Chief of the Police wrote: “They possess high moral virtues, and in the political sense they have not been noticed in any wrongdoings.” In their turn, officials of “the Kharkiv Provincial office bench in affairs of societies and unions found signs of non-compliance of the charter of the “Polish House” with the current legislation. In particular, it was pointed out that the document foresees the opening of the library, but “does not contain any instructions that the catalogs of books and periodicals of the library should be presented to the Kharkiv governor for approval.”

The charter of the “Polish House” was corrected in accordance with the objections, and at the end of 1909 “Kharkiv Provincial office in affairs of societies and unions” issued permission to start the organization. The law required the publication of information that a new organization was put on the register and on approval of its charter in the government newspaper Senatskiye Vedomosti (Senate Bulletin) and local newspaper Kharkovskie Gubernskie Vedomosti (Kharkiv Provincial Journal). Officials of the Provincial office did not fail to demand the receipt for the publication from Z. Harmansky and other founders of the “Polish House”.

In 1919 Z. Harmansky moved to Warsaw where he died in 1924. And the streets of Kharkiv still cherish memories of this talented Polish architectural engineer. 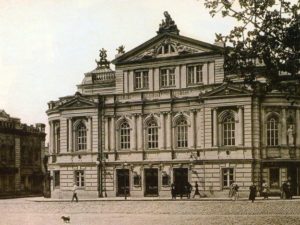