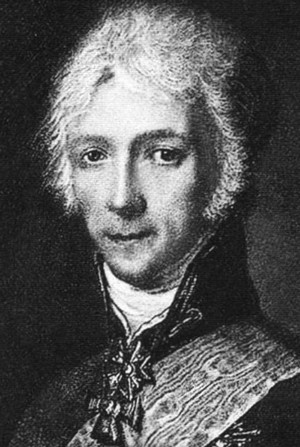 “What a consolation for the beholder represents the nature of the changes taking place in these regions – to see, finally, the promotion of science in the land, which until now was only a theater of desolation and combats. Your valiant ancestors have taken these lands from Tatars, but now the courage only is not enough, because even military tactics demand scientific approach. You have already shown your passion making a benefaction – and now in the reward for this your children will get an education among you; your city may become one of the most famous cities in the whole country, and in time it will become perhaps famous in Europe.”

Seweryn Potocki [pɔˈtɔt͡skʲi] pronounced these words on the 17th of January 1805 at the ceremony of the Kharkiv University’s opening (Universitetska Street 16, N. 49°59’19”, E. 36°13’46”), who later became the main mover of the cultural, scientific and educational development of the eastern territories of our country.

History changes along with generations. Now and then it trumpets some heroes forgetting about others or puts them to the background. But later it turns out that these very “gray cardinals” were actually the architects of the scene. This is exactly the case with Vasily Karazin and Seweryn Potocki. There is an opinion in the scientific literature that Potocki is a secondary figure with Karazin in the background considering the foundation and the opening of the university. But to what extent this can be trusted?

Before you bring someone on a “pedestal” of the history and hide others in its backyards, we propose to look at the aforementioned situation from a slightly different point of view. First of all, to get acquainted with the situation in Kharkiv at the beginning of the 19th century and to define obstacles that arouse on the way of creating there an educational center. Secondly, to estimate the figure of Seweryn Potocki through the lens of his activities in Kharkiv, his role in a university’s founding, functioning and rise. And thirdly, to draw conclusions to whom exactly should Kharkiv be grateful for its status of the first cultural and educational capital? So let’s start.

What was Kharkiv like at the beginning of the 19th century, and whether it represented a city at all? More likely no than yes. Because in those days it was an ordinary, forgotten by God and people province whose population was up to at most 20 thousand people. The Russian government hardly cared about this land which every spring used to turn into a swamp. The development of such a land presented severe difficulties. But the geographical location of Kharkiv played a positive role in its coming into being a city. It has led to the rapid development of trade. It was at that time that the local nobleman Vasily Karazin, having visited numerous authorities in St. Petersburg, obtained nonetheless the permission to found a university in Kharkiv. And a proper respect should be given to him for this. For who else but this passionate, dedicated, energetic and talented person could have changed an attitude of the Russian tsarism towards our city? Thanks only to the fact that Vasily Nazarovich marveled at the idea of ​​the university, with huge efforts he managed to make his dream come true and began to build a “cradle” of education and science in the eastern territories of Ukraine. The things got rolling at full speed.

And everything was as if absolutely fine – a university was to be built in Kharkiv! But how to create an internal, powerful, functional mechanism of this modern machine, which has never been seen before? There was a certain lack of western experience, and the obsolete one was rejected immediately out of old habit. Karazin offered his vision of what the internal structure and administration of the university should be; his ideas seemed good, but they were not impressive.

Here actually begins the high point of Seweryn Potocki’s career, who was appointed as a curator of the Kharkiv educational district. So let’s get acquainted with him more closely.

The hero of our story was born in 1762 in the Podilsky voivodship of the Polish-Lithuanian Commonwealth in the family of the Polish crown prince Jozeph Potocki. Having graduated from the best universities in Switzerland (Lausanne and Geneva), Seweryn returned in 1779 back home and for some time abided at the royal court. In 1793 he moved to St. Petersburg, where he entered later the circle of the closest friends of Emperor Alexander I. In 1801 Potocki was appointed privy councilor with an order to serve in the 3rd Department of the Governing Senate. Since 1802 he became a member of the Commission of Secondary Schools Affairs in the structure of the Ministry of Public Education. And in 1803 Seweryn became a curator of the Kharkiv educational district. Getting started with this business, Seweryn Potocki understood that he is not allowed to make any mistake. Therefore he made tremendous efforts to succeed. Potocki had credibility, because he was perhaps the only one to have studied in Europe, along with a clear strategy in his mind and on a paper.

Already being appointed “from above” as a curator, he travelled quite often abroad, but always had a finger on the pulse. For example, having felt “stagnation” in the process of foundation of the university, Seweryn decided to go to Kharkiv immediately. Potocki was often accused that in hard times he used to flee abroad, leaving all his affairs on the shoulders of his deputies. However historians forget that during these trips Seweryn assembled professors from different parts of Europe for Kharkiv. He clearly understood that there are few good teachers and scientists in the Russian Empire, and those who were, would hardly agree to move from St. Petersburg or Moscow to Kharkiv. That is why during official ceremonies, entertainments and celebrations he was always looking for professors, teachers or just educated and worthy people. If he perceived in them pedagogical talent and the desire to try a position of a teacher, he was glad to invite them to Kharkiv. Seweryn did not neglect visiting villages to talk with talented teachers there. He was ready to create the most comfortable conditions for their work in Kharkiv, offering a decent remuneration. Sometimes he had to accept a compromise or make concessions but Potocki was a born diplomat. That is why he always returned from travel not alone, but accompanied by future professors of Kharkiv University. Traveling abroad, the curator managed to gather a teaching “dream team” from all quarters of the earth, which for a long time successfully served our city.

Returning to Kharkiv, Potocki founded and headed the University Affairs Committee. Among its members were also Professors Rizhsky, Tymkovsky, de la Vigne, Ballen de Balliu and Osipovich. From that moment on the foundation of the higher educational institution became the prerogative of this department, and each member of it was concerned about solely his own affairs. The activity was diverse – from purely academic to business. The arrangement of the university’s premises was started immediately: rooms, auditoriums, laboratories, offices got necessary furniture and instruments. A library was created; books were imported and purchased; reading halls were arranged. A large botanical garden (now called the Taras Shevchenko Garden) (N. 50°00’03” E. 36° 13’45”) was set out, even own printing house was founded. Administration bought massive ground areas for future university development. Potocki personally controlled every spent coin. As a matter of fact, the Kharkiv University was not inferior to the others in the Russian Empire as for the level of equipment and teaching.

It should be said that in addition to business affairs the Committee concerned about financial issues, too. Collecting and saving money, controlling expenses, paying salaries, etc. – all this was also within the competence of the department of Potocki.

But, as it turned out later, the “root of evil” was hidden somewhere else. When Karazin’s primary goal was to negotiate with the government and to persuade noblemen to donate, then the curator had a serious challenge of a different nature. It was necessary to develop an algorithm of the internal structure and order of the university, to find and persuade teachers to come to the recently created institution, to equip the interior, to guarantee stable financing. As the first years of the history of Kharkiv University had showed, these were only the easy part of the task. The hardest problem lay in work with an ignorant society; it was necessary to get the idea of importance of education across to people; to eradicate a belief from unlettered heads that plain people should work hard from dawn to dusk. One way or another, any attempt to change the mindset of the people takes time. Sometimes this process lasts for centuries. But even the noblemen, who had donated for the foundation of the university, did it thoughtless. Undoubtedly, they understood that they were investing money in a good endeavor, but after that they took little interest in the further fate of the university. Therefore during the first years after the opening the university was idle, and the teachers were waiting for students.

Potocki tried to convince society to come and get education. He started preparatory courses in plain language; created a fairly simple system of entrance exams; made all his best to encourage as many people as possible to enter the university. Years passed, and thanks to these efforts students began to arrive in Kharkiv from the most remote corners of the Russian Empire. It was this factor that turned eventually the ordinary province into a real city, an educational capital through which the life was pulsing. Potocki eventually took on not only an educational, but also an important national role in the history of Ukraine. It was he who managed to awaken the population, whose mind slept undisturbed till that time, clouded with endless mundane problems. Which is to say – Seweryn created the groundwork for the Ukrainian national revival to flourish in Slobozhanshchina in days to come.

Having opened the university, Seweryn fervently continued to take care of his creation. But already in 1817, due to the decision of the Russian government, he was suspended from the post of curator and was forced to hand over responsibilities. Seweryn devoted the rest of his life to family and diverse trade deals, but with Kharkiv in mind, till his death, he always attended all important events and holidays at the university.

So, though being the representative of another country and culture, Seweryn Potocki changed our city forever. And among the many achievements of Seweryn, the main and invaluable is the fact that he managed to awake a reasonable and conscious attitude towards education in the minds of natives.

Anyone who reads this text will surely arrange his or her own “pedestals”, priorities and preferences. But this fact cannot be ignored: without Seweryn Potocki Kharkiv would have remained without its unique soul.